Philip Geen was President of the Anglers Association and published “What I have Seen While Fishing” in 1904.  For thirty years he fished the Lyon on the opening day of the season (15th January), having got the sleeper train from Euston, then checking into the Fortingall hotel.  Here are some extracts from his book.  Please note all pools are described from the left bank (on the left if you face downstream) except for Peter’s Pool.

“At the upper end of the dale [around Fortingall] there is an opening in the high enclosing hills, invisible until closely approached, through which you enter Glenlyon Pass.  Emerging from the pass you enter Glenlyon proper, with its wide river stretching for another thirty-five miles, up the full length of which spring salmon perseveringly travel to their spawning beds.” [this was before the dam was built to form Loch Lyon]

“His astonishment increases as he enters another, and still another bend.  Thus the scene shifts, from beginning to end.  The hills, rising almost perpendicularly from the bed of the river, give the whole glen its individuality of character, and help it to form a little world by itself.”

“The fascinations of Glen Lyon in mid-winter are manifold … and the river, with its quickly varying moods from lowest level to its highest flood, is a study in transformation scenes. A nip of frost and you may see its fall, while an hour of sunshine will bring water that will cause the fish to move a pool or two, and then sport should be yours.  Oh yes.  I love the Lyon in winter almost as much as in summer-time!”

“The Lyon to me, in the Spring, is the beau-ideal of a salmon river, containing, as it does, every kind of water that the heart can wish for.  Here are falls, rapids, broken pools, rocky rushes, and swift, yet unbroken currents.”

Peter’s Pool is named after Peter Dewar, whom Philip describes as “a grand specimen of the Highlander”.  “If, as may well happen, he should become excited, fear not; he will express his views in Gaelic.” 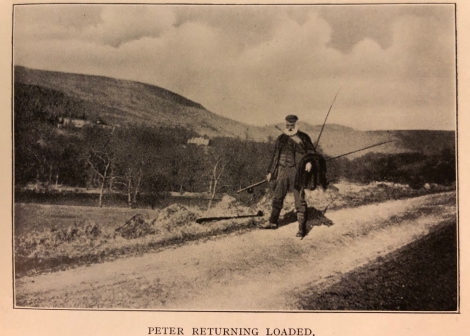 “There are more fish taken every season from this than from any other three pools, and there are more to be seen leaping here than in all the others taken together.  Those who would like to fish this pool … should bring their waders.”

“The favourite spot is in the stream that sets off from the projecting rock.  Do not stand on the rock, but keep upstream and cast across, allowing your bait to sink by laying out line – it is very deep – and, as it trundles across, keep the bait on the spin by a movement of the rod until it is quite at the rock; then draw gently back, and if there be no response, repeat the experiment.  No matter the state of the river Peter’s Pool will always give you a chance of success.  Even when in high flood you may get one from the eddy under the tree at the tail.”

“If in ply, [this pool] is a very desirable chance.  The fish often come from amongst the big stones quite above the pool, but you must cast a long line and be prepared to draw in quickly as soon as the bait passes the centre of the stream.  As you get to the deeper water below you can fish to your fancy, as there is depth close in. Within a few yards of the seething caused by the yellow stone visible when not in ply, you have most reason to be expectant as it is there that the fish generally take; but I have, more than once, got them much lower down.

“… is at the foot of the big cairn. The spot at which to commence to fish is at the foot of the second cairn, some fifty yards higher up.  On looking to the opposite bank you will see a wire fence running down to the water.  Throw straight for it and about three-quarters of the way across; then you will just miss the high stones. It is behind these that the fish are sheltering from the full force of the stream.  Make several casts here, and then search each yard down until your bait is opposite the other cairn, where you should again make several casts; and then on, foot by foot, until you reach the fir-trees that are at the edge of the river.”

“The little ladder which gives this pool its name takes you down the face of the rock some ten feet, and lands you on a half-round ledge [about 30 feet above the water] where there is just room to stand; and when there, you have the appearance of exactly fitting in with Nature’s intentions, filling a void.

“Cast straight across or a little up, and then use the stream to aid you to cover the whole.  There are fish within a few yards of you.  When you have him play him as much as you can from where you stand.  He will rush for the falls, but that is so far up that you should be able to turn him.  His last effort will be to go down-stream, which you must permit him to do.  Then you go up the ladder with rod in right hand and winch free, but with the check on, and scramble as best you can down the rugged sloping side of the rock to the music of your winch cause by the speed of the fish as he make over the shallows for the next pool.

“When you lose touch of your fish, as you will do more than once while descending, to the level of the stream, get on him again quickly with raised top, so as to keep your line free from the jutting rocks and high stones.”

Long-ladder Pool (now Platforms) before the platform was built.

“The wall that safely encloses the road from the precipitous rocks is the one that I have so often gone over to peep down on the fish in the deep water below.  The ladder is necessary to the getting down to the river with comfort, not to say dignity.  When at the bottom of the ladder you can easily approach the stream, where you will find yourself on a level with it.  It is easily fished, and a most likely spot when in ply, but you will require some skill to kill your fish when hooked, as there are two probabilities to be guarded against.  The first is his getting up into the falls; that is likely to lose you tackle as well as fish; or he may go down and not stop even at the Little -Ladder, but on to the Cairns, and as you cannot follow one yard, that is a certain loss.  Your gillie, if as experienced and resourceful as MacLeish was, will stand above you, stones in hand, and keep him from the falls, but he cannot aid you in the case of his going down.  So be rough on him, especially when he is going from you.  I have killed several fine fish here, and as yet, with unbroken luck.”

“Falls must be fished, as there you are again sure of either a fish or numerous refusals.  I have often felt while here how greatly the pleasure of angling is enhanced by the sure knowledge that one’s bait will be seen by numbers of grand fish… It is here that they congregate before negotiating the falls, which, natives say, they start to do with the beginning of February.  When you hook a fish … you must be rough, as he must not be permitted to grope about the bottom or go down out of the pool…

“It is a pretty sight to see them leaping at the barrier, failing and falling back, then leaping again and succeeding.”

“Having got over the Falls, the fish become as frisky and as easy to deceive as a fish fresh from the sea.   So try you here, whenever the pool is in ply.  I will only tell you to be on your guard against the efforts of a hooked fish to get back over the Falls.”