Hamish went along to the presentation of the Fishpal Malloch Trophy on Friday 15th January, an event which was combined with the opening day for the River Tay (of which the River Lyon on the estate is a main tributary of, so this date also marked the start of our fishing season too). As well as Tom Buchanan receiving the trophy for his winning salmon, Hamish received a framed certificate for being ghillie on the beat, and the estate also received a framed certificate for ‘the river’ where the fish was caught.

Lots of press and film screws were there including BBC Scotland, and ITV Grampian. The trophies were presented by the CEO of Fishpal, Mark Cockburn, and Dr Aileen McLeod MSP, minister for Environment, Climate Change and Land Reform. 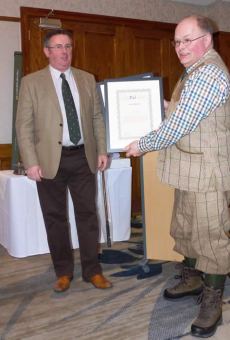 A video was also made about the day, with Tom’s song as the soundtrack – written in 1975 about his love of salmon fishing…