Charles Noxon has been organising a trip to the South Chesthill Estate for around 35 years. This year’s trip was no different, with many salmon caught, and a great time had by all staying in Chesthill House! Heavy rain on Sunday saw the river rise to over 3ft on our gauge.

Brian Hall (aged 79) caught his first Lyon salmon (pictured) showing that age is no barrier! The salmon weighed 13lbs and was caught in Island Pool using a monkey fly.

Monday also saw Steve Smith catch a 9lb sea liced salmon from the platform, however Tuesday saw a couple of salmon lost. After the freshet, Rod Morrison caught a cracking 12lber from Rock Pool, eventually landing it 20 yards downstream of the pool!

Saturday saw a visit to the Hill Loch, and in between the gusts of wind, John Moorby landed a couple of brown trout including the monster 3 3/4lb one pictured below.

Trout fishing on the river was also good during the week with the party catching more than 50, Paul Cawte accounting for almost half of them. The largest, about 2lbs, was caught by Tom Browne-Lowe, a novice fisherman.

Brian Hall with this 13lb salmon 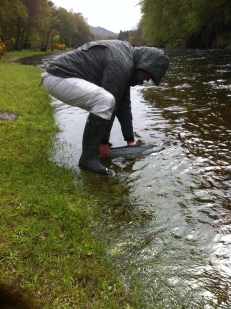